TOKYO — While three retired nuclear reactors in Japan have been authorized to restart for the first time since the 2011 Fukushima disaster, numerous hurdles must be cleared before they resume operation in what would be a major step toward Prime Minister Yoshihide Suga’s goal of drastically reducing greenhouse gas emissions.

From stricter counterterrorism requirements to the storage of spent fuel, as well as the Japanese public’s lingering distrust in the fuel source, the government faces an uphill battle to revive the country’s long-stalled reactors.

Fukui Gov. Tatsuji Sugimoto on Wednesday gave his approval to restart three nuclear reactors operated in the prefecture by Kansai Electric Power — units 1 and 2 at the Takahama plant and Unit 3 at the Mihama plant. They will be the first reactors over 40 years old to return online in Japan following the meltdown at the Fukushima Daiichi plant in 2011.

Japan limited the life span of nuclear reactors to 40 years as a general rule as part of stricter regulations introduced after the 2011 disaster. But those that clear a special safety inspection can be granted an extension to 60 years.

Japan this month also decided to release radiation-tainted wastewater from the Fukushima Daiichi plant into the sea, as the increasing stockpile at the site hamper efforts to decommission the damaged plant. The decision has faced significant pushback from some of Japan’s neighbors. 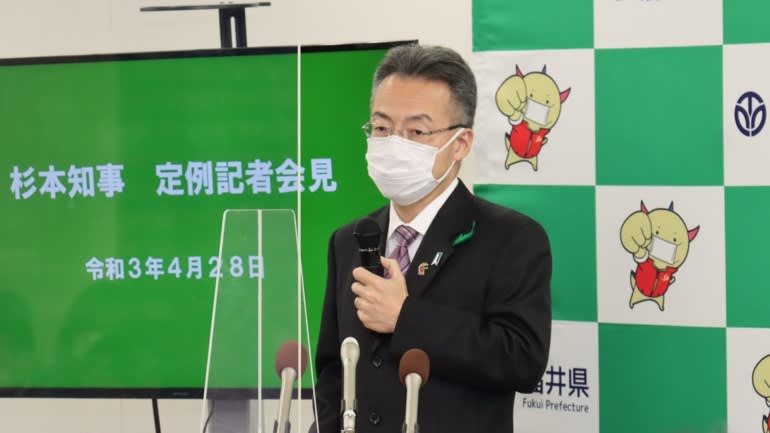 “The Japanese side should realize its responsibility, fulfill its international obligations, and revoke its wrong decision,” to release the wastewater into the sea, Chinese Foreign Ministry spokesperson Zhao Lijian told reporters Wednesday.

The recent moves are part of Japan’s greater efforts to reduce its greenhouse gas emissions by 46% by fiscal 2030 from fiscal 2013 levels, and to achieve net-zero emissions by 2050. Under Japan’s existing energy plan, nuclear power is expected to make up about 20% of the country’s electricity mix in fiscal 2030. About 30 reactors would need to restart to achieve this goal.

There are currently 33 reactors across Japan excluding those under construction, after 24 were decommissioned following the 2011 Fukushima disaster. So far, only nine have come back online. Even if all were to restart, only 21 would be under the 40-year cap at the end of fiscal 2030.

To encourage the use of older reactors, the government plans to provide 2.5 billion yen ($23 million) in grants for each reactor that operates beyond 40 years.

Several are already at or past the 40-year limit, including the three reactors now slated to restart in Fukui. Restarting them will be an unprecedented challenge, given their age and the roughly decadelong gap in operations. Kansai Electric, as well as its partners and suppliers, will send 200 technicians to inspect the facilities.

There is speculation that the reactors could restart as early as the middle of next month, though Kansai Electric President Takashi Morimoto avoided a specific timeline at a Wednesday news conference.

Japan is also working to ramp up its solar and wind capacity as part of its decarbonization efforts. But these energy sources are heavily affected by the weather, and require better storage batteries, installation costs and more extensive power grids to become a widespread option. Some blamed rolling blackouts in California last summer on the U.S. state focusing too heavily on renewables at the expense of more predictable energy sources, like fossil fuels. A solar power station in Fukushima Prefecture: The wider adoption of solar power is constrained by the weather, as well as limited storage and grid infrastructure.

Meanwhile, nuclear reactors can maintain a stable output regardless of weather conditions. Running at 80% capacity, the three Fukui reactors could reduce Japan’s carbon dioxide emissions by 7.7 million tons a year — 0.7% of the nationwide total.

Still, restarting reactors is just a piece of Japan’s nuclear conundrum. Two of the Fukui reactors are supposed to be equipped with counterterrorism safeguards by June 9 — a deadline Kansai Electric says it will likely miss — and the other by October. They will be forced to shut down again unless the deadline is met.

It is also unclear where the spent nuclear fuel would go. The Fukui government had asked Kansai Electric to identify possible interim storage sties for the fuel outside the prefecture by the end of last year, but Kansai Electric was unable to come up with a list in time.

Morimoto told Gov. Sugimoto in February that the company would decide on a possible site by the end of 2023, or shut down the three reactors until one can be found.

The life span of nuclear reactors are another looming issue. Even if every Japanese reactor were granted the extension to 60 years, less than 20 could remain in use by 2050 and none by 2070 unless new ones are built.

Business leaders and some members of the ruling Liberal Democratic Party are urging the government to consider new nuclear reactors as part of its revised basic energy plan, partly to preserve the technological know-how involved.

Nuclear plant operators and municipal governments are seeking clear guidance on the issue. Unless new facilities are built to replace those that hit the 60-year mark, host communities that have economically relied on the nuclear plants would suffer a heavy blow.

The national government will also need to be actively involved in planning for a potential accident. Though local authorities are ultimately responsible for drawing up evacuation plans, ensuring a smooth response across a wide geographic area will require national support.